It was an eventful start for our trip to Khao Yai, and as it’s me, i’m not at all surprised. For those of you who don’t know me, I should probably mention now that things rarely run smoothly; mainly due to my scatty personality. So, back to Khao Yai. I will start from the beginning: Rob and I met Kai and his friend Nicola at Ramkhamhaeng airport link, where we were planning to get the train to Mo Chit, from there we could then catch a bus that would take us to Khao Yai. Having met at the station I then realised it would be quicker and cheaper to get a taxi as I had in my head that Mo Chit was central Bangkok (Its not). Quickly, we ordered a big taxi and were on our way. Once arrived at the bus station I knew we needed ticket counter 49. As we were looking around we found the desk numbers 47, 48, 50, 51… Where the hell was 49!? After walking around looking like lost tourists (which we were, kind of) we decided to ask someone and quickly learnt it was upstairs (phew). Having bought the bus tickets we then had 3 minutes to catch the bus, so off we ran. Realising the bus wasn’t quite what I had imagined it would be I decided it was wise to go to the toilet before embarking the 3 hour bus journey. So I dumped my stuff on the floor, including the tickets, and ran to the loo. Once I was ready to get on the bus I was asked to show my ticket. As Rob and Kai were already on there so I assumed they had my ticket – a quick phone call later and I realised no one had the tickets. I had lost them (sorry guys). Off I ran back to the loo to search for them whilst everyone else looked through their bags. I searched every cubicle, tried to ask the toilet attendant (she spoke no English) and even looked in the bins. To no avail they were not found. In the end Kai had to run all the way back to the ticket office in 30C+ heat to reprint the tickets (thank you Kai!!) and in the mad panic he accidentally shoved a monk out of the way (maybe this is why Kai has the luck he does…) The bus itself reminded me off the old school bus I used to catch every morning, only this one was built for Thai people; It was tiny, smelly and very very clunky.

3 hours later we finally arrived! As we walked into the hotel I was genuinely speechless, no photos do it justice. The hotel is very open so the building blends into the outdoors seamlessly and it instantly feels like a 5* retreat. In fact, I felt as though I had just entered rehab (in a good way) after a week in Koh Phi Phi. Soon after arriving I found myself relaxing in the restaurant with a Darjeeling tea waiting for our room to be ready. They were running late so we went to check out Kai and Nicolas room, which was amazing; they had a plunge pool in their private patio and a huge open plan living and bedroom area. 2 hours later our room was finally ready! In comparison to the other room ours was a lot smaller but had a huge balcony that hosted a bath overlooking the mountains! It was beautiful. 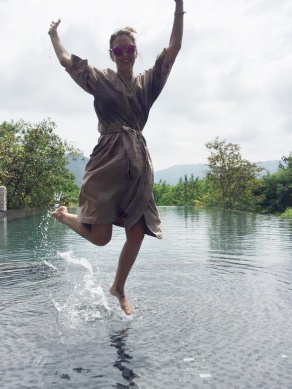 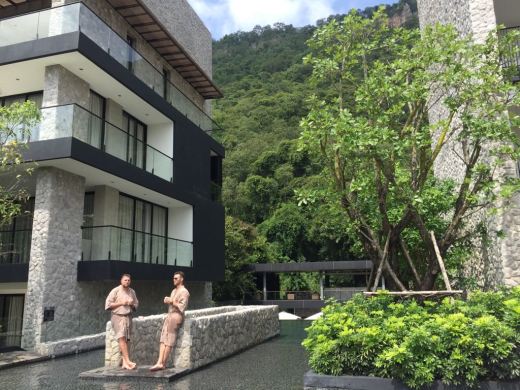 The next day we woke up early to join a tour in the national park. Having set off we joined a group of 8 other people, some French, some English and some Austrian. Everyone in the group was lovely and it didn’t take long for us all to start talking. The first part of the tour was a 3 hour trek through the jungle where we got to see poisonous snakes, spiders, monkeys and even some horn bills! After a quick stop for lunch in a watch tower over looking a watering hole where all the wild animals go to eat (unfortunately there weren’t any there when we went) we made our way back to the truck. The next stop was visiting the famous waterfall that was used to film “the beach”. After a steep climb down we were rewarded with an amazing view of the waterfall with a beautiful rainbow at the bottom. With Kai being Kai, and not being built for the jungle life he didn’t dress appropriately; with a pair of shorts (trousers were advised) and his red designer trainers, paired with sexy leach socks, he nearly fell in whilst standing on a big rock trying to get a good photo – fortunately he managed to stop himself in time otherwise it may not have ended so well! (Although it would have been funny for us!) 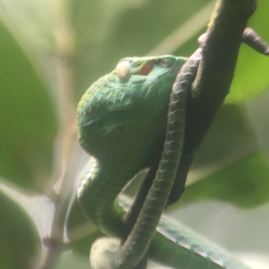 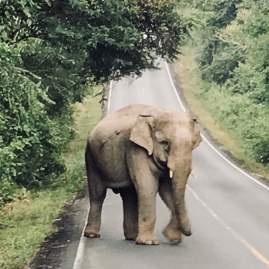 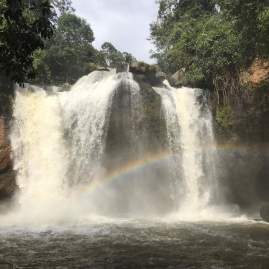 The last part of our tour involved driving around the park searching for wild elephants. It didn’t take us long to find one as we entered the elephant zone of the park. 5 minutes later we got stuck behind lots of cars turning around, flashing their warning lights or simply waiting. Ignoring all these cars our driver overtook and slowly drove down the road only to be met by a wild elephant! I was in awe of this amazing animal; so intimidating yet gentle. The elephant was in the road for a good few minutes before crossing over and heading back into the jungle. As we turned around and headed back up the road we were then greeted by another elephant crossing the road! It was such a surreal moment and one I won’t forget any time soon, it was simply amazing.
Upon arriving at the hotel we were all feeling tired and decided to eat the hotel restaurant out of convenience. As we walked in we noticed the staff learning how to say “the restaurant is full” in English which I found ironic as the restaurant was completely empty – in fact, every time we went there for dinner we were the only ones there! As we left the staff all wanted a photo with Rob, maybe it was because they thought he was famous.. Or maybe it was just because we were their only customers? Probably! We all  headed back to Kai and Nicolas room to chill out for a bit, only this was far from relaxing! As we entered the room we soon realised that they had left the patio door wide open and as a result, a giant beast like moth decided to chill out in their room. I wish I had a photo but I was too scared to get that close to it. It took over an hour to get it out as we were all too scared to go near it and in the end Kai wrapped a towel over it and chucked the towel outside, wafting it about 10 times to ensure it was gone!
The next day we had a lazy morning by the infinity pool before embarking on the second part of the tour. In the afternoon we met the tour group again who took us down to a natural spring to go swimming. This was a lot smaller and a lot busier then I had expected it to be, almost spoiling the view. However, I have never seen water quite so clear or fresh, despite the amount of people there. The next stop was visiting an underground cave that was originally used as a temple before the monks were given the funds to build one above ground. Whilst in this cave we got to see a tarantula, hammer head spider and various other scary looking insects. We then had to squeeze and climb through a very narrow part of the cave which then opened up to a very large bat cave. As the sun was setting we made our way out and traveled to another cave. Here, we stood outside and waited until we got to witness millions of bats leaving the cave; a constant stream of black in the sky for over an hour as they headed out to hunt. The same thing happens every night, at the same time, at the same place like clockwork. As the night came in we were then shown a millipede that the tour guide had found, who then, without hesitation put it onto Kai’s face! I had absolutely zero interest in touching any of these creepy crawlies and kept well away. To end the tour our tour guide then got out his telescope and lined it up with the moon. The sky was so clear; you could see so many stars and never have I seen the moon look so clear as I did that night. 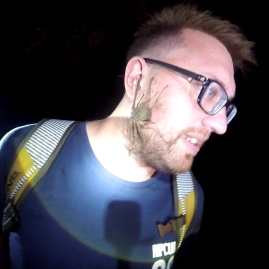 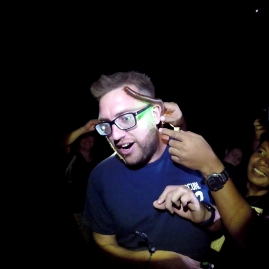 Kai and Nicola headed back to Bangkok the following day, whilst me and Rob had one last day. We spent it relaxing by the pool and ventured out for dinner to the Chocolate Factory in the afternoon. As it was the day of the Kings funeral, everyone was dressed in black, literally everyone – apart from Rob; Rob was in bright colours having not thought about it, and as the restaurant got busier and busier Rob grew more awkward, much to my amusement!
My time in Khao Yai has been so relaxing and chilled, quite the opposite to Koh Phi Phi and it was exactly what I needed. I had a lot of thinking time on this holiday and times it felt very surreal; Staying in a 5 star hotel with a bath on the balcony, an amazing view and an infinity pool, I could not afford to stay one night here if it were in England! Fortunately with Thai prices and a discount through a booking agency it was affordable in Thailand and I feel incredibly lucky that I have these opportunities.

One thought on “Khao Yai”