I wish I could admit that It’s taken me a while to write this blog because I have been really busy; but in reality I’ve been enjoying a lazy life of binging on Netflix and celebrating Christmas. Sometimes it’s nice not to do anything! However, I have finally found the motivation to write this blog, so here we go! 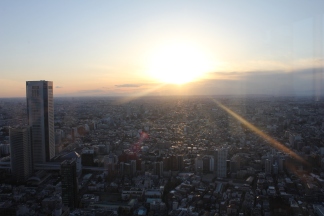 If you’ve read my other blogs, then by now I’m sure you will be aware that things rarely run smoothly for me and this trip was no different. Me and Rob were greeted at the airport by our friend Kai who looked very stressed but for good reason as Air Asia systems were down. The airport was crazy busy and after queuing to check in for what felt like forever, we were finally seen to – only to learn we were at the wrong check in desk! We were then sent to another one where we had to queue for another 40 minutes. Finally there, we all had to re check in and sort out our luggage. Once through security we grabbed a very quick lunch and then ran to the gate to board the plane with only minutes to spare!

After a relatively smooth flight we landed safely and made our way from the Airport to our accommodation. This was easier then I had thought, but not without it’s challenges. We very quickly learnt that the Tokyo train network is vast and at first glance, a tad intimidating. With the help of some friendly staff we found where we needed to go but couldn’t find the right platform, or even where to buy a ticket from! Several times we got very lost on the Tokyo trains and had several expats help us find our way! By the end of the week we had sort of understood how it works but I did start to wonder if anyone ever truly understands it?

Having arrived late at night we decided to head straight out to see the famous Shibuya Crossing. For those who don’t know what it is, it’s a famous landmark; the busiest crossing in the world (apparently). Its a great place to watch the world go by and see the bright lights of Tokyo. As we were walking around It didn’t take long to stumble across our first arcade. It was crazy – 6 floors of games, with each floor dedicated to one style of game, including gambling (it felt like the Las Vegas of Asia).  With hundreds of people sat around playing; some were even multitasking by playing games on their phone at the same time. What surprised me the most though, was how it was filled with mostly Japanese business men, suited and booted, who have clearly just left work.

The following day we got up early and ventured to one of Tokyo’s most famous, and probably most beautiful parks; Shinjuku National Garden. With it being early winter most of the leaves had either turned golden yellow or a fiery shade of red and there were even some cherry blossoms still in bloom. Tokyo has many beautiful parks which we took time to walk around in; they are so relaxing and a perfect way to escape the city without actually leaving. Rob and I found a dog cafe near another beautiful park filled with lakes and fallen leaves; Yoyogi. At the dog cafe you could sit and spend time petting them or take them for a walk in the park. Not being able to resist, we hired a little grey toy poodle named Peko! It was hard not to steal her and sneak her back with us, she was adorable. 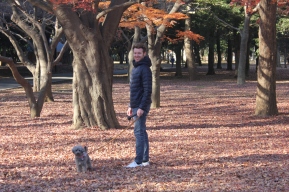 One day we stumbled upon a street called Takeashita. Intrigued, we took stroll down but quickly realised it was the most touristy street in Tokyo! Partly for it’s name, but mainly because of the quirky, typical Japanese style fashion shops, dessert and animal cafes. Wanting to check out some of the animal cafes Tokyo has to offer, we decided to visit an owl one. The owls were in a closed off room next to the cafe, for hygiene reasons, but you could go in at your allocated time (they give the owls regular breaks between visits). You are then taught all about the owls and their different personalities and then given the opportunity to pet and even hold them if you wanted to. Following this we found a Purikura shop; a whole floor filled with giant photo booths. It works like a normal photo booth, only it is triple the size (designed for big groups) where you are given a variety of poses to copy. You then go to the next booth where you can photo shop the hell out of your photos. It’s mostly popular with Japanese school girls but we found it so much fun and a perfect souvenir for our trip!

One of the highlights of the trip had to be Mari Kart; we dressed up as different Mario Kart characters, hopped in some themed go karts and had a 3 hour tour of the city! It was crazy but amazing to be driving around Tokyo as though we were in a game. Every time we stopped people would wave and take photos with us, it was very surreal! Continuing the gaming theme we then headed over to a famous gaming area in Tokyo called Akhabara, or Electric Town. We found more arcade and gambling places, vintage game shops, and sex shop department stores: As with most big cities, there is a seedy x rated side to Tokyo which we may, or may not have accidentally stumbled across… In this area you can find many maid bars, with young girls standing outside trying to tempt you in (we didn’t visit any of these, I should probably add). We did however have a little look in the sex shop department store where they had everything you could imagine and more, including used knickers for sale! Something that really shocked me though, was a small sign we noticed next to the changing room. The sign stated that if you tried something on and let them take a photo, you could have a discount! As we were walking down the stairs in this shop we then noticed hundreds of photos of girls in sexy lingerie, who have obviously wanted the discount. The ironic thing is they would either hide their face but have everything else out, or have their boobs covered but their down below out, or visa versa! After this we went to check out an anime store. Little did we realise though, that it was an anime porn store! I wont describe some of the things we saw, but it was very funny and some of it shocking!

Later that night, as if it wasn’t enough of a crazy day we went to see the famous Robot Restaurant. There’s no way I can really explain this, you just have to see it for yourself – but it is as crazy as it sounds! From the moment you enter the building to the moment you leave, everything is thought about and everything is decked out in crazy lights and decor. The idea is you sit down in rows with a small table in front of you so you can eat a meal, whilst hundreds of dancers and robots put on a show for you. For me, it really did sum up everything Tokyo is about!

It wouldn’t be a true trip to Toyko unless you experienced what some of the night life has to offer! And it did not let us down. I wont go into details, but it started in an area known as Piss Alley (apparently, it got its name through the lack of toilets that used to be there!). The area is filled with lots of tiny alleys which are lined with little bars and restaurants. After a few highballs (Tokyo’s most popular drink) we ventured to the gay district, Shinjuku Ni-chome having been told about the bars there having arcades in the middle of the dance floor. Unfortunately, as it was a Monday night, it seemed everything was shut so we ended up in a tiny little bar with 8 locals (that’s as many as you could get in the bar). The locals were very friendly and after a few more highballs we ended up playing a game of crocodile dentist (this really takes me back!) – every time you lost, you did a shot (for free). As you can imagine it got quite messy and we ended our night in a karaoke room (would our trip truly be complete without karaoke?).

Our final day was spent at Disneyland! The park was still super busy, despite being on a school day but we managed to get on most of the rides with not too much of a queue. Personally I preferred the Hong Kong park though because it was quieter and we managed to see everything, including all the shows in one day. We didn’t get to see any shows at the Tokyo park because it was either too busy; you had to get a “lottery ticket” or we couldn’t find the stage! We did get to see the Christmas parade though which was amazing and the whole place was decorated for Christmas so it felt very festive! The perfect way to end our trip. 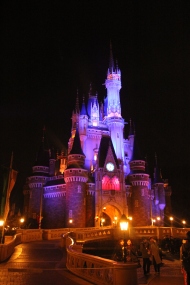 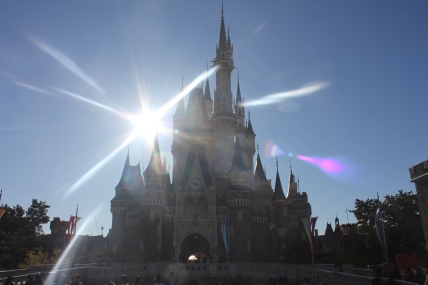 One of the things I was really looking forward to in Tokyo was the food, and it did not disappoint! We went to an amazing Ramen restaurant, Ichiran, where you pay and choose your what noodle you want from a machine, then you wait to be seated in a little individual booth. They bring the (amazing) ramen to you, close your shutter and your free to slurp away without anyone seeing you! Bliss!

The second amazing restaurant we tried was a katsu curry place, Go Go Curry. It’s similar to Ichiran in the sense its in a tiny basement and you order from a machine. Then you sit down, watch it be whipped up freshly in front of you and bring it over to your table. It was the best katsu curry Iv’e ever tried! Even better than Wagamamas (sorry).

Me and Rob are both big fans of Gyoza, so it was only natural that we wanted to try as much as we could! We visited a few different places but our favourite by far was this little place in Tokyo’s Golden Gai. You order through an ipad on your table and choose what type of gyoza you want. We had several different, mouthwateringly good types, but the best by far was one the waiter recommended, a normal gyoza but with a soup inside so as you bite into it, it oozes out. Sounds messy, but it was worth it!

Finally, It wouldn’t be a trip to Tokyo without trying some Sushi! Neither me nor Kai really like it but we thought we would give it ago. We visited a conveyor belt sushi bar called Genki Sushi. Here, you order your sushi of an ipad, and a few minutes later your sushi is sent out to you on a conveyor belt. Perfecto! As someone who doesn’t eat it, I thought it was surprising good – although me and Kai did order chips (I know, its bad).