With such a busy term it was a huge relief when half term finally came around. I could not wait to see more of Thailand. This holiday, me and Rob decided to visit Koh Lipe, a small Island just of the coast of Thailand near the Malaysian border after hearing how beautiful it was.

The journey there was surprisingly smooth. We went to the airport straight from school, flew to Hat Yai where we stopped over night before catching a 2 hour transfer the following morning to the pier and then an hour speed boat to the Island. (Its not easy to get to!) Our accommodation felt like a prison cell but for what works out as £5 a night I wouldn’t expect much more.

Upon arriving I was excited to see crystal clear water and perfectly soft white sand. We got a taxi to our accommodation; a bamboo hut, set back from the beach within the jungle. As soon as we arrived we felt relaxed and instantly switched off from the rest of the world.

Koh Lipe is only a small Island with a laid back vibe and with expensive resorts to budget hostels and a mix of nice restaurants and bars, Koh Lipe attracts a mix of travelers and families. Our time here was very chilled and uneventful for the most part – we spent most of our time lazing around on the beach with a beer in our hand. One day we decided to get of the beaten track a little and discover some secret beaches. We headed over to a resort with a “private beach” where we spent the morning lazing around under a tree and swimming in the sea before moving on to a hidden beach. We trekked through the jungle and scrambled over big rocks to be rewarded by a beautiful, little beach all to ourselves! It felt like something from castaway and was the perfect place to spend the rest of the day. Well… We planned to anyway but it didn’t work out that way. As I ventured off exploring further down the beach I was heading back, (carefully) climbing through the little rocks, until I slipped, fell back and hit my head on a rock. Fortunately I was fine and just left with a headache and a nasty bump. Not long after Rob started to feel really ill and decided to see the doctor. Turns out he had an infected knee from a cut that has started to spread. Ouch! The rest of our time on Lipe was uneventful, apart from the sheer amount of mosquito bites I was suffering from. I lost count how many I had throughout the holiday but it was definitely more then 40… (I wish I was exaggerating – I got 20 in the first afternoon of being there before I put any mosquito repellent on).

The last few days of our holiday were spent in Koh Tarutao for our 3 year anniversary, also Valentine’s day (cheesy I know – and I don’t even like Valentines day). Koh Tarutao is the biggest island within the national park and the least built up. You can stay at one of the basic huts on the island if you book through the government website or you can simply turn up, hire camping stuff, and pitch your tent which is exactly what we did. Anyone who knows me will know that I am not really a camping sort of person. But, Rob has been asking me for years to go camping so finally I caved in (girlfriend points)! Despite sleeping in a very uncomfortable, hot stuffy tent with very, very basic and not very clean facilities, I surprisingly enjoyed it! We pitched a space right on the beach with the most beautiful view and even better sunsets. Waking up to that view in the morning is something money really can’t buy.

The island is steeped in History with it having 2 prisons/work camps (holding 3000 people at its peak) used before the second world war where people were exiled. One prison was for political prisoners and the other was for more serious offenders, such as murderers. Here they were attempted to be rehabilitated. Unfortunately as WW2 broke out they were rationed and a lot of the prisoners died from malnutrition and basically slave labor. Those that survived, prisoners and guards (apparently) became pirates. What remains today is a only a few buildings of where the staff and some of the prisoners lived.

The afternoon we arrived we decided to hire some mountain bikes to go and explore the site of the old prisons. Little did we realise how far it was; we ended up cycling 14k to the first prison site (it was another 12k to the second site – we never made it that far!) In +30 degree heat!. Picture the steep windy roads the Olympians ride – that is what we had to cycle. When I say cycle, I should probably add that it was more a case of Rob pushing both our bikes up the road and me struggling to keep up. Along the way though we were rewarded with amazing views over the island and saw lots of monkeys, giant lizards and tropical birds. When we reached the first prison site we were anxious to go and explore. We followed an old cobbled path mostly taken over by the jungle. Along this route we saw a few wooden houses and a large wooden tomb used to punish prisoners by making them lie down in there for days at a time (unfortunately I don’t have any footage because my gopro battery died – always the worst time!). We didn’t last long though (the path went on for miles with lots of different ways to go) as we got to freaked out to view it all; the jungle was blocking the sun making it dark and we saw no one else on our whole trip which made it feel very eery, almost like we shouldn’t be there. It took us 2 hour to get back and that night we were so tired we were in bed and asleep by 8pm!

The following morning we were abruptly awoken at 8am by the national anthem being played through the speakers on the island (everyday at 8am and 6pm the national anthem is played in public places and on the radio where everyone is expected to stop what they are doing). Having woken up early (for me) we were keen to see what the rest of the Island had to offer so we went kayaking through the mangrove in the jungle for an hour before we reached a crocodile cave. Being completely honest this was a little anti climatic and I enjoyed the kayaking more then the cave. The rest of our time on the island was spent relaxing on the beach taking in the views. 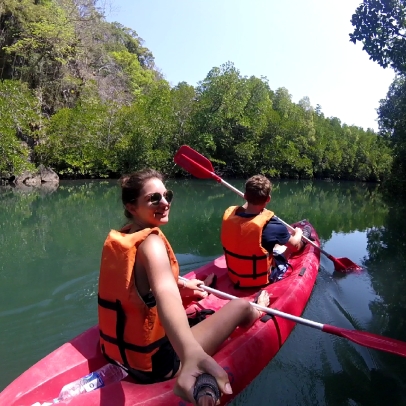 Overall I preferred Koh Tarutao to Koh Lipe as it gave you the feeling of having truly escaped it all and finding that little piece of paradise. The island itself is mostly jungle and because it is protected there are only a couple of Thai restaurants, limited accommodation, no cars and just one road taking you from one side of the island to the other. It was far less touristy than Lipe meaning we basically had the most beautiful beach I have ever seen, all to ourselves! We shared our camp site with wild boars and some very cheeky monkeys who went through my bag trying to steel some paracetamol and baby wipes! There was just one problem though – sand flys. We were warned about these and I did wear a lot of mosquito repellent but I still managed to get attacked (probably in between swimming and walking to the tent – it seemed almost impossible to avoid). By the end of the holiday I ended up looking (and feeling) like I have chicken pox with bites all over my whole body. My arms and legs came out in what is either hundreds of tiny tiny bites, or a reaction to something (I cant work it out) but at least I have a lovely tan!
So if your ever heading to Koh Lipe I would fully recommend going of the beaten track and visiting Koh Tarutao for a few days, just pack the mosquito repellent! (And lots of it).